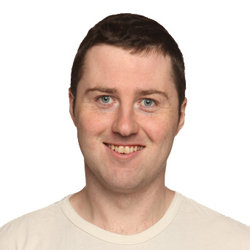 A sort of picaresque shaggy dog story. Will contain jokes about bread and circumcision. Expect a potent brew of gags, stories, riffs and accents. Only joking, he just does the one accent. You may have seen Lloyd on Ask Rhod Gilbert (BBC1) or heard him on Wordaholics (BBC Radio 4). Praise for his 2011 show, 'a smart and properly funny observational comic' (Guardian). 'An experience that seems likely to prove one of my highlights of the Fringe' **** (Chortle.co.uk) **** (List).

A brand new show from Lloyd Langford about one man's difficulty navigating his way through the world.

A mix of One Day in the Life of Ivan Denisovich and Smallcreep's Day, but with less stuff about Gulags and the futility of factory work and more jokes about acronyms and the difficulties of buying bread.

The show follows Lloyd's thoughts, movements and encounters over one 24 hour period, focussing on the minutiae we encounter in our everyday lives, and how on a particularly bad day, the cumulative effect can be overwhelming. Remember Michael Douglas in Falling Down? Well, replace him with a slightly world weary Welsh bloke and that's One Day In The Life of Lloyd Owen Langford.

Lloyd's TV appearances include Ask Rhod Gilbert (BBC1), Dave's One Night Stand (Dave), Russell Howard's Good News (BBC3) and Comedy Store Live (Comedy Central). He plays Bryn in Everyone Quite Likes Justin (BBC Radio 4) and has appeared on The Now Show, It's Your Round and Wordaholics (All BBC Radio 4).

He has also written for some of TV and radio's most popular shows including Rhod Gilbert's Bulging Barrel of Laughs (BBC Radio 2), Ask Rhod Gilbert (BBC1), Live At The Apollo (BBC1), Never Mind The Buzzcocks (BBC2), The News Quiz and The Now Show (both for BBC Radio 4).

He won the Chortle Student Comic of the Year in 2004 and was nominated for the Chortle Best Breakthrough Act 2008 and a Sony Award 2011.