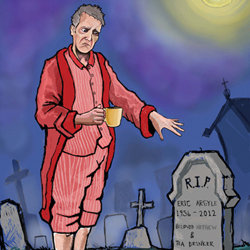 Eric's having a bad Sunday. It's late, he's still in his pyjamas, a room full of people staring at him, and he died at 11.42am, two days ago. This new play from 15th Oak Productions innovatively tells the story, equal parts comic and tragic, of Eric Argyle, the man who barely lived enough to have regrets. From the creators of the 2011 Scotsman Fringe First winning play Minute After Midday **** (Scotsman), **** (WhatsOnStage.com), **** (List).