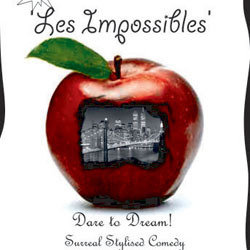 Les Impossibles is a surreal stylised comedy which endeavours to bring the inner workings of an aspiring actor's mind to life on stage. Four actors attempt to overcome their doubts and fears, in order to achieve their dreams whilst playing a range of characters. This piece takes the audience on a journey of creation which leaps from the reality of the play to the imagination of the actors. It incorporates several different theatrical styles, including Brechtian and physical theatre. Les Impossibles questions the obstacles that we, as artists, put in our own way to achieving Les Impossibles.