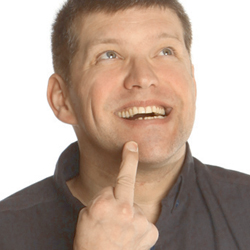 Sceptical when told climb every mountain, reach for the skies and follow your dreams? Then this is definitely for you! Star of BBC1's We Won't Drop the Baby. 'Dangerously funny' **** (Scotsman). 'Brilliant' ***** (EdinburghGuide.com).

How come a Paralympic football team losing in the first round will still be thought inspirational; but when the regular England team does the same they're a bunch of bastards? In his inimitable style that's earned him 25 four star and 7 five reviews, Laurence flips our idea of what's inspirational on its head.

The show Inspired focuses on how Laurence is often told he's "inspirational" for doing ordinary, everyday activities. 'It's my pet hate' says Laurence, 'whether it's for being married, doing stand-up or having kids, it just seems like they thought I'd never amount to much. I love to inspire people with my stand-up comedy but don't call me inspirational for just getting on with my life!'

Hot on the heels of his recent BBC1 documentary, We Won't Drop the Baby, which was Pick of the Day in The Sunday Times, Mail on Sunday and The Telegraph, Laurence has also topped Shortlist magazine's Britain's Ten Funniest New Comedians. He has appeared on BBC's Newsnight in an authored feature, Channel 4's highest rating show as a stand-up comic and as a talking head in the BBC2 documentary Are You Having a Laugh? He is regularly called upon to comment on social issues on radio, TV and in the press and regularly writes for the Independent. He consistently has successful Edinburgh shows, all of which have garnered a multitude of 4 and 5 star reviews and Inspired looks set to be another winner.