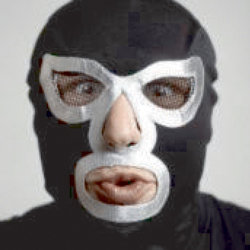 The country's most exciting sketch group are back with their biggest, boldest and best show yet. The Foster's Edinburgh Comedy Awards nominees and Chortle Award winners have created an hour of mind-blowingly funny sketches, inspired songs and outrageously imaginative set-pieces. 'Their sheer verbal, physical and visual inventiveness leaves you breathless' (Edinburgh Evening News). Total sell-out 2010, 2011. 'A gloriously funny spunkstorm of bad taste' ***** (Chortle.co.uk). 'Quite brilliant' **** (Times). 'Sketch comedy doesn't get much better than this' **** (Scotsman).

Late Night Gimp Fight are back at the Edinburgh Fringe, and this year they mean business. Strap in for what is set to be the biggest, most ambitious sketch comedy show the Fringe has ever seen. Expect the usual heady mix of technical prowess, drum-tight writing & slick choreography in an all-out Gimp-tacular. They're in their largest venue yet, and thus are planning what can only be described as an arena show - you won't see a more awe-inspiring sketch show anywhere else this year. Incorporating projection & television screens the Gimps are developing a new kind of interactive multimedia sketch comedy, wherein the technical wizardry is integral to the comedy as much as it is framing it. Expect more of their famed musical set pieces, as well as typically unique takes on American footballer dads, contemporary dance and that scene from When Harry Met Sally...

The Gimps were an underground hit at the Edinburgh Fringe in 2009, compounding the hype in 2010, they then went on to win best character/sketch act at the Chortle Awards in 2011.

The 2012 incarnation of Late Night Gimp Fight is David Moon, Lee Griffiths, Matt Ralph and Paul Biggin. Lee, Matt and Paul trained at East 15 Acting School and David studied at Drama Studio London. They are directed by Steve Marmion, Soho Theatre's artistic director and are an associate company of Soho Theatre. Having performed with his fellow Gimps for the past three years, this summer Richard Campbell has to bow out due to his commitment to his pupillage for just this year's festival.