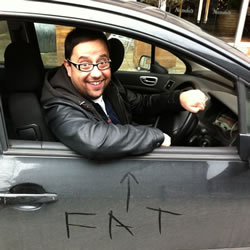 A man messing about and refusing to act his age. Expect chatting, stories, improvisation, Q&A, characters, notes, diaries, and sheer slickness followed by utter shambles. This former stockbroker now professional comedian shares mostly self deprecating tales of his much changed life as he does the show he's always wanted to do and is finally Larkin about!