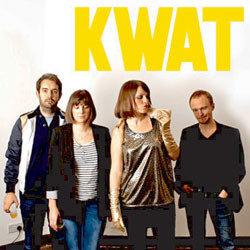 Welcome to the Democratic Republic of KWAT. Left off the world atlas after missing the application deadline. Journey with us as we explore the dirty under-carriage of our suburban dystopia. A sketch comedy act.

Welcome to the Democratic Republic of KWAT.

A country left off the world atlas after missing the application deadline.

Journey with us as we explore the dirty undercarriage of KWAT's suburban dystopia and discover some of the strange rituals and disturbing traditions that make this country unlike anywhere else in the world.

A country where cutting-edge men's hairdressing is not just a load of bollocks; where grey squirrels are finding their nuts trapped in the vice-like grip of rebellion; where an engaged telephone call has a whole new meaning and where not cool is the coolest thing.

KWAT are Andy King, Chloe Metcalfe, Maddy Carrick and Mike Goward. Mike, Chloe and Maddy met working together on a monthly sketch off at the Leicester Square Theatre. At post-show drinks Mike would bring his mate Andy along, and so was formed the Democratic Republic of KWAT.

Andy King studied English and Czech at Oxford, then went on to be a billionaire's dogsbody and hand make picture frames.

Mike Goward studied stand up at the University of Kent, vaudeville at UCLA and now sells 3 magazines for £1 with Keeley from Bewtiched.

Maddy Carrick studied in London, New York and Moscow, she now sparkles as a fairy at children's parties every weekend.

Chloe Metcalfe studied at University of Lancaster and has lived in Italy, Russia and China. She teaches people in London how to speak English.