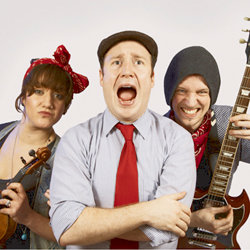 The world's first ever comedy blues band, Jonny & the Baptists make their Edinburgh Fringe Festival debut with an hour of surreal, satirical and occasionally sexy songs, including online hits: Do it in the Library and Upper Middle Class Gangster Children.

Having taken the comedy circuit by storm in just a few months, Jonny & the Baptists host a monthly musical comedy night Midweek Crisis at The Vandella in Shepherd's Bush and will be performing at festivals across the UK this summer including Secret Garden Party and Latitude, as part of Robin Ince's Book Club.

Jonny & the Baptists have written a musical for Nabakov at the Soho Theatre (transferring to Nabakov Arts Club @ BAC) and are currently working with the National Theatre Studio on a musical of the prequel to Peter Pan.