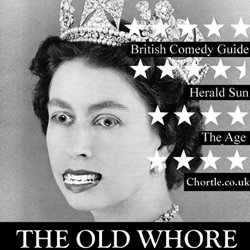 In 1950, John Robertson slept with Queen Elizabeth II. He is not sorry. Can a man sow his seed in the ashes of a dynasty? This is 'brilliant, brutal, bizarre and poetic' (Metro) stand- up from the manic Australian wunderkind. 'Brilliant' **** (Comedy.co.uk). **** (Chortle.co.uk). **** (ThreeWeeks).

John Robertson is the comedian you deserve.

In 1950, John Robertson slept with the Queen. He is not sorry. Can a man sow his seed in the ashes of a dynasty?

The whole shameful odyssey is such an involved, affecting love story, on a par with West Side Story and Romeo & Juliet, that he will only be revealing the truth of the issue 22 times and for money.

The Old Whore is the new RiotShow (a surreal monologue with additional yelling) from John Robertson, the whimsically brutal, bright- as- a- button Australian dandy responsible for Blood & Charm, Dragon Punch! and A Nifty History of Evil.

John Robertson is a surreal storyteller who takes words and historical events and makes them his playthings. They play brutally, movingly and in a dark and mysterious fashion. You will laugh at the weaving of lies and the unravelling of John's brain. This is manic depression without the depression.

A comedian, journalist, clown and host - in the last eight years, John has performed everywhere from a rained- out bomb shelter in Hungary, to legendary comedy clubs in London and packed theatres in Sydney. He's had fans dress as him, been concussed by well-meaning punters and brought the riot- times wherever he's gone.

Capable of just about anything, John has MC'd and performed at events as diverse as the Edinburgh Fringe, the Supanova Pop Culture Expo, Wai-Con - The Western Australian Anime Convention, the Under The Blue Moon Goth Festival. To the best of his knowledge, he is the only Australian comedian to have ever interviewed a Dalek.