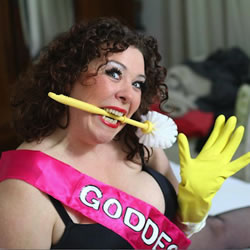 Pandora, Goddess of Yorkshire, dishes the dirt on herself, her punters and her fellow strippers, warts 'n' all. Through stand-up comedy and hilarious parodied cabaret we experience her journey from toilet attendant to XXL stripper. Pandora's Box has been a sell-out success in London and Brighton previews. This one-woman show is a marriage of Eyre's brilliant writing and Jollie's belting voice. 'Eyre's sparkling writing is slick, witty and well-crafted' (FringeReview.co.uk, 2011), performed by Joanne Jollie. 'Joanne isn't just Jollie, she's the best' (Christopher Biggins). Free Festival must-see.

Goddess of Yorkshire sings her heart out at Comedy Cabaret show!

Pandora, Goddess of Yorkshire, dishes the dirt on her punters, fellow strippers and self through a rollercoaster of comedy and parodied cabaret. A single mother to eight children, Pandora takes you on her journey from toilet attendant to XXL stripper and Olympic beach volleyball player, belting out well-known songs as you've never heard them before!