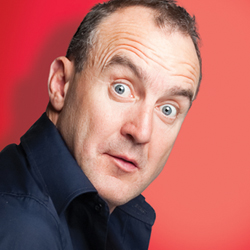 After a phenomenal year with appearances on The Royal Variety Show 2011 and BBC's iconic Live At The Apollo - as well as a massive tour of UK and Ireland that had to be extended due to demand - Jimeoin returns to Edinburgh this year with his latest show.

Jimeoin is loved by audiences throughout the world for his brilliant wit and his razor-sharp take on the absurdities of everyday life, and has even beaten the world's scientists to the finish line by introducing the concept of the Speed of Cheese - the more useful and alternative measurement to the Speed of Light - into modern day vocabulary.

Having left his native Northern Irish town of Portstewart and settling in Australia where he started his comedy career, Jimeoin (pronounced Jim-Owen) is now such a household name he even had racehorses named after him. His disarmingly relaxed, cheeky and sometimes surreal sense of humour has led to him performing sell-out tours to record-breaking audiences across the length and breadth of his adopted homeland. He has released several top-selling CD'S and DVD's and has also built up a strong international following.

Recent UK TV appearances include Live At The Apollo, The Royal Variety Performance, Channel 4's Comedy Gala, Michael McIntyre's Comedy Roadshow, Jason Manford's Comedy Rocks, Best Of Just For Laughs and multiple appearances on Best of Edinburgh Comedy Festival. In the autumn of 2012, Jimeoin is set to continue touring the UK and Ireland and will return to our TV screens.