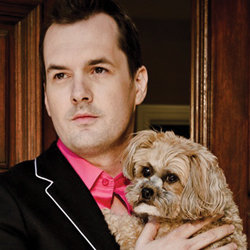 Caustic? Charming? Controversial? Call him what you will, but stand-up phenomenon Jim Jefferies is acknowledged as the fastest rising, most hilarious cutting edge comic ever to claw his way to the top of the comedy world. Hailed by critics and loved by his legions of fans, Jefferies' glorious roasting of society's most sacred cows has made him a headlining sensation around the world. 'Better than Jesus' (Scotsman). 'Britain's most offensive stand-up comedian' (Q Magazine). *****(Metro). ***** (News of the World). ***** (Herald). ***** (List). ***** (Edinburgh Evening News). ***** (Manchester Evening News).

Jim Jefferies, the globally renowned Australian stand-up, has announced a return to this years Edinburgh Festival for his 7th solo show Fully Functional - this will be the first time he has performed in the UK since his 2010 mammoth 50 date tour of the critically acclaimed show Alcoholocaust.

Now a seasoned resident of Hollywood and with a huge Stateside following to boot - Jim is due to announce a massive US arena and theatre tour for this Autumn promoted by giants AEG as well as the forthcoming recording of his very first FX series Legit. As a writer he has also sold 4 scripts to date - no mean feat! He also has a hugely successful monthly podcast that has over 500,000 unique visitors a month and he has recorded over 100 episodes to date. He now has a hardcore fan base with at least 10 fans having his name tattooed on their bodies!

He recently performed at LA's Gibson Theatre alongside Eddie Izzard and Larry King as well as being the closing speaker at the Global Atheist's convention in Melbourne in front of 10,000 people.

His last Edinburgh saw Jim perform a triumphant and critically acclaimed 6th solo show at the Edinburgh Festival's 1000 seater McEwan Hall, where he sold over 17,500 tickets and garnered six 5-star reviews and eleven 4-star reviews, Jim is firmly established his place in the hierarchy of UK comedy.

On UK TV Jim he has been the face of Comedy Central UK's Grouchy Young Men and has appeared on ITV's Comedy Rocks, BBC1's Have I Got News For You (where he flirted outrageously with, and was turned down by, host Moira Stewart!), BBC2's Never Mind The Buzzcocks, and BBC Three's The Worlds Most Offensive Joke Channel 4's 8 Out of 10 Cats, E4's Big Brother's Celebrity Hijack, Dave's Carpool with Robert Llewelyn, Sky 1's Premier League All-Stars (playing for Fulham) and Paramount's Class of '97 alongside Simon Pegg, Matt Lucas, David Walliams and The Mighty Boosh. Stateside Jim has hosted HBO's Live at Gotham, and starred in Funny as Hell and Down & Dirty and has also been seen on The Tonight with Jay Leno, and Lopez Tonight and was the main panellist on Paul Provenza's Green Room.