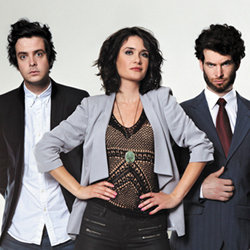 Dan Antopolski is a multi-award-winning veteran of eleven Edinburgh festivals. In 2009 he won the Dave Best Joke Award. His previous collaborations include the Perrier Award nominated sketch show Lee Mack's New Bits with Lee Mack and Catherine Tate. Dan starred as Jeffers in two series of the cult BBC Two sci-fi spoof Hyperdrive and as Jesus in Hollywood blockbuster The Da Vinci Code.

Tom Craine is an award-winning stand-up comedian and writer, as seen on Russell Howard's Good News (BBC Three). Previously one eighth of highly celebrated Fringe sketch group Superclump, Tom has performed two critically acclaimed solo shows, supported Rhod Gilbert and Russell Kane on tour and written for Mock The Week (BBC Two), Stand Up For The Week (Channel 4), 8 Out Of 10 Cats (Channel 4), Chris Addison's Show & Tell (E4) and The Now Show (BBC Radio 4). He also co-wrote the BBC Radio 2 sitcom The Sharp End (in which he starred alongside Alistair McGowan) and played the lead in a series of shorts for channel Dave. Tom has recently filmed a documentary for BBC Two called Jesus to Jay-Z, and is scheduled to film further documentaries for the channel.

Nat Luurtsema is an award-winning stand-up comedian and author. Nat was also an eighth of the sketch group Superclump, and as a stand-up she was nominated for a Chortle Best Newcomer Award eight months after her first gig. She went on to star in 2008's The Comedy Zone at the Pleasance Courtyard, and made her solo debut with In My Head I'm A Hero in 2010. Nat's first book, Cuckoo In The Nest, was published by Hodder and Stoughton in April 2012. She has written for BBC One, Channel 4, Radio 4, Sony Playstation, Grazia, The Sunday Times, The Daily Mail, The Guardian, The Observer, The Radio Times and Reveal.