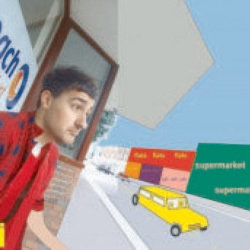 Character comedy from the character comedian who dares to say what everybody's thinking and saying. So, the way it'll work is there'll be a different special guest opening act each day, then Jamie will come out and do some characters! Fantastic! Cheers, thanks everyone. 'The absolute highlight in a show full of highlights' ***** (Skinny). ***** (ThreeWeeks). ***** (FreshAir.org.uk). 'Jamie Demetriou is hilarious, perfect comic timing' **** (FringeReview.co.uk). 'Demetriou had the audience leaning forward in their seats every time he came on stage' **** (PlaygroupBristol.co.uk)..