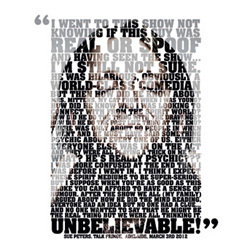 Ian D Montfort BSc (pseudo) will not only have jaw-dropping messages from beyond the grave but will use pseudoscientific methods to prove ESP, homeopathy and past life regression aren't rubbish. 'Funny and baffling (Scotsman). 'An astonishing finale that leaves the audience shaking their heads in disbelief. Montfort has certainly got the tricks ... an absolute treat' (Metro). ***** 'Binns is the epitome of what a comedy mind reader should be ... a faultless guise ... an absolute highlight of the Edinburgh Festival ... completely unmissable" (EdinburghSpotlight.com). Critics Choice - the Guardian, the Observer and the Times.