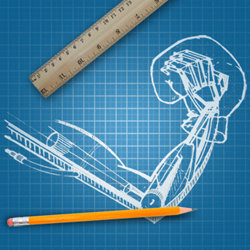 Gadgets and old school mechanics celebrating the triumph of engineering over pesky nature: darkness, disease, gravity... From the team behind hit show Your Days Are Numbered: Maths of Death ('a genuinely fun, thought-provoking hour', Chortle.co.uk). Their last show drew sell-out crowds, debunking dodgy stats, media scares and overblown health panics. Now they're back to give the same irreverent treatment to Mother Nature and the mean tricks she pulls to try and keep humans in their place: the cave. See how engineering helps humanity defy nature and beat boredom into submission. Also: robots! Supported by R. A. Eng.

Nature can be a mean Mother, always trying to set limits on our aspirations with things like darkness, cold and gravity. But we wily humans have a few ideas of our own... Celebrate the triumph of technology over pesky nature with new gadgets and old-school mechanics, new gags and old-fashioned moustache jokes. Also: robots!

Humans V Nature is brought to you by comic & writer Timandra Harkness and "stand-up Mathematician" Matt Parker, the team behind smash hit Edinburgh Fringe Festival show Your Days Are Numbered: The Maths of Death. Their last show drew sell-out crowds from Edinburgh to Australia, debunking dodgy stats, media scares and overblown health panics. Now they're back to give the same irreverent treatment to Mother Nature and the mean tricks she pulls to try and keep humans in our place: the cave.

Matt Parker is possibly the only person to hold the prestigious title of 'London Mathematical Society Popular Lecturer' while simultaneously having a sold-out comedy show at the Edinburgh Fringe, Matt is always keen to mix his two passions of mathematics and stand-up, "making mathematics not merely engaging but utterly hilarious" - The Guardian

Timandra Harkness ("a deadly wit" - The Scotsman) performs as a solo stand-up as well as taking part in improvised shows with Instant Wit and science-themed comedy with double-act the Comedy Research Project.

Humans V Nature is supported by the Royal Academy of Engineering.