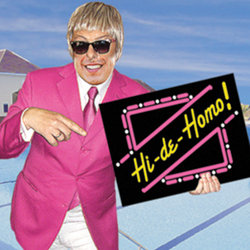 Following last year's sell-out Little Shop of Homos! the London Gay Men's Chorus Ensemble are back for a fifth year, to premiere their new musical comedy. Set in a holiday camp of yesteryear, expect their usual variety of magical musical styles including Irving Berlin, Elton John, The Smiths and Lady Gaga, show-stoppers from favourite productions and their famous brand of homo humour. This summer, let the boys of London Gay Men's Chorus Ensemble put the camp into your holiday! Promises to be the must-see event of the Fringe.