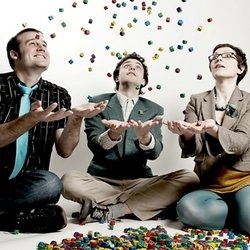 On 6th and 7th tickets are two for one. Additional shows added on 8th and 9th.

For one week only, the sold-out phenomenon for the insatiably sci-curious comes to the Fringe. Stand-up mathematician Matt Parker, geek songstress Helen Arney and experiments guy Steve Mould host a show for the fearlessly inquisitive. Three of London's best (and nerdiest) perform a celebration of comedy, science, music, maths, interactive experiments and maybe some things that go bang. 'Riotously funny show about science ... brimming with unashamed geekery' (ThreeWeeks). 'Harnesses comedy to highlight what is fun, and funny, about science' (NewScientist.com). 'Don't miss this gem of intelligent fun' (STV Edinburgh).

After a year of sell-out shows in London and science festivals around the country, they're bringing their unique mix of facts and fun to the Edinburgh Fringe Festival for one week only, before heading off on a national tour of the UK from October.

Join three of the UK's best (and nerdiest) performers for an evening of comedy, science, music, maths and interactive experiments as they ask those all-important questions: How can you use a parabola to set stuff on fire? How does the angler fish make love? And how dangerous can things get with just numbers?

Spoken Nerd has appeared across the UK at comedy venues including London's Theatre Royal Haymarket, The Bloomsbury Theatre and Shakespeare's Globe and science festivals from Brighton, Cambridge, Edinburgh, Cheltenham to the British Science Festival in Aberdeen as well as taking part in their first TEDSalon in May this year.