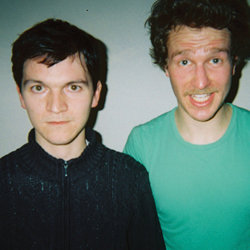 The best thing to come out of Cornwall since tin. 'These Cornish casio rappers will blow you away! Who would have thought that such energy and excitement could come out of a small village in the west country. These guys are a hilarious riot of bleeps and banter. And apparently massive in Brazil!' (Farmfestival.co.uk). 'Blending simple, homemade beats with witty observations, they cover everything from the wonders of the internet, the joy of Tetley tea and day-to-day life in their hometown of Redruth' (Edenproject.com). 'Anyone who's seen them live will know that the duo are a visual and aural delight' (247magazine.co.uk).