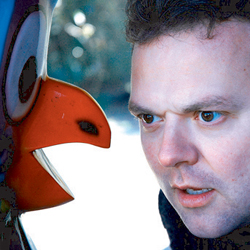 Star of The Royal Variety Performance and Michael McIntyre's Roadshow, Hal Cruttenden returns to the Edinburgh Fringe Festival with Tough Luvvie - a stand out, stand-up show about middle class rage.

Hal's got his head in the game and his eyes on the prize, at least one of the gloves is off and he's been spotted rehearsing his fighting stance in the bathroom mirror. You might not think he is the manliest of men but it's no more Mister Nice Guy as this self-proclaimed "luvvie" sets out to show us what he's really made of.

Widely regarded as the ultimate circuit comedian, 2012 Chortle Award nominee, Hal Cruttenden is in huge demand and has been guaranteed to have up to four audiences a night in stitches with his hilarious tales of middle class trials and triumphs. But with a new deal with leading distributor 4DVD, a sitcom in development with Open Mike Productions and his highly anticipated return to the Edinburgh Fringe, 2012 marks the dawn of a brand new Hal.

Hal Cruttenden is one of the top comedians working in the UK today, as well as being a highly accomplished writer and actor. Recent television appearances include Michael McIntyre's Comedy Roadshow (BBC1), The Royal Variety Performance 2009 (ITV), Comedy Rocks (ITV) and The Rob Brydon Show (BBC2) and The Omid Djalili Show (BBC1).