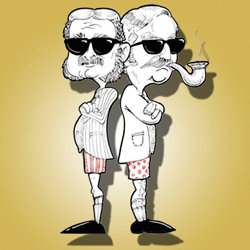 A pompous tenor. An ambitious but ditsy soprano. A voluptuous mezzo. A veteran baritone. Can these four zany characters get through every Gilbert and Sullivan operetta in 70 minutes without killing each other? This madcap race through all 14 operettas is direct from New York, featuring the original US cast. Get ready for pirates, sailors, major generals and damsels in distress in this topsy-turvy musical romp that the American press has called 'Gilbert and Sullivan meets Saturday Night Live' (White Plains Reporter) and 'The very model of a modern major hit!' (Washington Post).