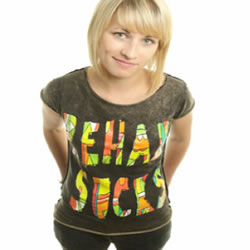 Frankie Williams makes her debut appearance at The Edinburgh Fringe Festival with her compilation show featuring some of the best comedians at this year's festival.

Joining her on stage for stand up and musical comedy are 16 of the UKs finest and rising comic stars; two different guest performers every day performing snippets from their own hour-long shows and or performing new material.