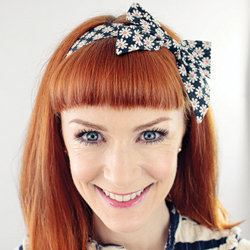 Semi-finalist in So You Think You're Funny? 2010 and Finalist in Midlands Stand Up 2011, upbeat character comedian Fliss Russell is bringing her hilarious solo show to the Edinburgh Fringe for the very first time.

Following a highly-praised appearance at the Fringe in 2011 as a cheerleading 'Lady Beth' in the sell out Shakespeare For Breakfast - Macbeth The High School Years, Fliss is back to introduce audiences to Simone Lawkins, a larger than life time travel expert, deadpan yet magical pirate Claire and Welsh cousin Beverley.

Keeping the audience on their toes with magic, games (with prizes) and even a spot of time travel, Fliss's debut Edinburgh show tackles burning questions such as: Can a Pirate really entertain children? Is it morally right to use time travel to bag your perfect man? And do you always need a third thing to be funny?