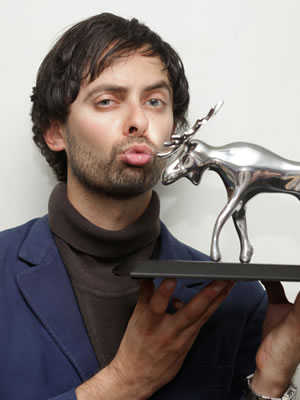 Marcel Lucont: Gallic Symbol has beaten over 100 other shows to be named the winner of The Amused Moose Laughter Awards 2012.

This competition, which was established last year, aims to seek out the best comedy show at the Edinburgh Fringe without a commercial DVD deal. This year's final was held at the Bongo Club earlier today.

Arrogant French stand-up Marcel Lucont is the creation of Buckinghamshire-born comedian Alexis Dubus, who is also performing a separate show under his own name at this year's Festival. The blurb for Gallic Symbol is as follows: "Witty, acerbic Frenchman seeks audience for one hour only for fun, adventure, maybe something more. Must have own underwear and socks and breath, but be prepared to have these charmed off, laughed off and taken away respectively."

As a result of the win, Dubus takes home a trophy, a grand prize of £5000 (for the development of his career), and a commercial standard DVD recording deal. Organisers say: "Marcel refused the opportunity to comment on his triumph, responding only with a shrug."

The other shows to make it to the final were Alistair Barrie's Urban Fogie and Laurence Clark's Inspired.

Also this afternoon, the results of the Amused Moose's long-established stand-up award - The Amused Moose Laugh Off - were decided. For the first time in the competition's history, the votes for first place were tied, resulting in Funmbi and Richard Todd being jointly named the Amused Moose breakthrough acts this year. The duo shared the £1500 prize fund. 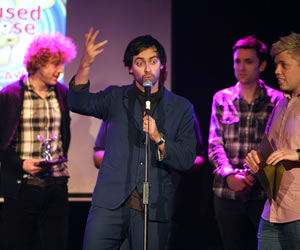 The results for both events were determined by a panel of industry professionals, combined with votes from the live audience.

Snaith said: "The energy and excitement that the host Rob Beckett created in the Bongo Club and the phenomenal performances by all the finalists who 2entertain will be talking to over the next couple of months about possible DVD deals and support, was palpable. And the enthusiasm of a committed industry panel from as far apart as Edinburgh and Melbourne and San Francisco, who have been viewing online the deluge of Amused Moose Laughter Awards entries from early July and then live once the Fringe started, is to be commended and demonstrates the international respect that the Amused Moose Awards hold, and we are delighted to support these extremely thorough talent searches".

The winners will feature in the Amused Moose Comedy Awards Showcases at London's Soho Theatre in September.

Information about entering the awards in 2013 (the Laugh Off award for newcomers, or the Laughter Award for headline acts performing an hour-long show at the festival) will appear on www.AmusedMoose.com early next year.

Below is a video profile of Marcel Lucont: