We asked Felicity Ward to write a 'piece' about what she's been up-to at the festival. We got back this interesting, entertaining and un-expected article instead... 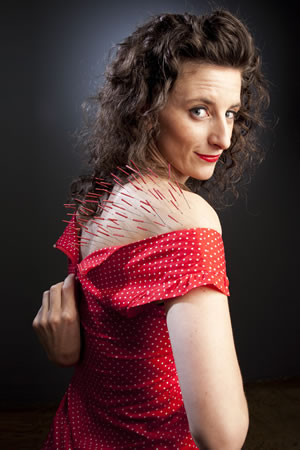 It's a strange moment when you realise you've locked the keys in the house, when you're overseas, and the person that owns the flat is away in Malta. Especially when up until that point you've been so smug about the fact that you're in Edinburgh staying with a friend, not in one of the rent-inflated properties. The good news is that she wrote down her friend's number who had a spare set of keys. The bad news is that I was so arrogantly sure that that would never happen I didn't put the number in my phone.

You'd think that comedians just sit around making jokes and japes, but what gets discussed more than anything during a festival is domesticity - how poorly are you eating? Who are you staying with? Are you shitting a lot? How many hours sleep are you getting? You see, I've got a pinhead but I've bought a sleeping mask that's so tight it's actually bruising my nose.

Even you think that's shit. I hate you. Do it again.

I've got quite a conundrum: I'm in Edinburgh and I hate sun showers.

Really? Booooooo! Get off.

Every festival, comedians get asked to write "pieces". Opinion pieces. About the festival. About their experience. About anything. It's great promotion. It's great for creativity. And it's great to be asked. But sometimes there's just nothing left to say. So I thought I'd write a piece about writing pieces. Still reading? Woo hoo!

Most people that work in any form of expression (comedy, art, music, journalism etc) harbour a secret desire to be something other than what they do. Simply by participating in stand-up comedy, we have to believe that what we say is worth having other people listen to. And not only worth listening to, but worth paying money to listen to. Pretty conceited. So it's not that much of a stretch to believe, when asked to write an opinion piece, that a comedian's inner journalist/novelist/political campaigner assumes this opportunity is destiny.

As Run DMC vs Jason Nevins once said, 'and it goes a little something like this':

1) Do not start writing the piece until you are within one day of the deadline. There's no use planning for genius - it just happens.

2) Trawl through your memories of the 24hrs. Surely there's some microscopic 'event' (see: missing the train, getting overcharged for a brownie, having your status upgraded on your Frequent Flyer programme) that you can stretch out to a 3-10 paragraph novella.

3) Take your laptop to a café and write. I bet Capote bloody loved an open space and a latte to accompany his abundant imagination.

5) Once you've found a starting point (Oh God, that jerk Beatrice has arrived. I don't want to talk to her. Better look busy writing) be self-deprecating - who knows, your future boy/girlfriend might be reading this. Give it a good "oh shucks" factor.

(Feel free to highlight how hopeless you are at something, how socially awkward or uncoordinated you are - I have used this countless times in articles and it has never failed to give the reader a one way ticket to the Eyeroll Express.)

6) Let the article take a slightly earnest turn (a turnest) about three quarters of the way through. I mean, you're a comedian, but you still think heaps good too. And shoe horn it in - you want people to look at each other and think, "Hey, not only is she an average comedian, but she's passionately uninformed too!"

7) See if you can drop in a Kafka, Neitzsche or Pablo Neruda quote. You don't have to know who the fuck they are, but someone else will, and they might be reading.

8) Realise you've written 1,500 words of going nowhere, and tie it all up in a rushed unsatisfactory manner. It will sound like you've made a point, but really you've just imitated a conclusion. I like to take my Dad's advice and use his final English exam resolution - "As Ghandi once said, 'And they were all made of sugar and it rained'."

And THAT'S how you write an article!

*Points at her crotch with both hands, thrusting and humming Rod Stewart's If You Think I'm Sexy*

'Felicity Ward: The Hedgehog Dilemma' is on at Underbelly (Bristo Square) every day at 10pm. Check out all her rather good reviews here: Listing