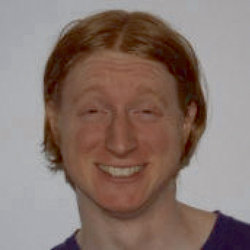 Eric Hutton has been a stand-up comedian for six years. In that time he has said the right thing to enough slimy industry fat cats to have been on T.V. (Stand Up Australia) and radio (Triple J), as well as performing at numerous festivals (both the indoor and outdoor type) in Australia and the U.K. He has also been threatened four separate times after shows. Not that his material is that offensive by today's standards. Maybe I'm just an irritating guy who can't stay in third person for very long.