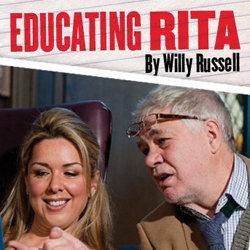 Matthew Kelly and Claire Sweeney star in Willy Russell's classic comedy. Rita, a brash, unschooled hairdresser, enrols with the Open University. Her fresh reaction to the classics challenges the attitudes of her lecturer Frank who begins to question his own understanding of his work and himself. Matthew's theatre credits include his Olivier award-winning role in Of Mice and Men. Television credits include Benidorm, Bleak House and Cold Blood. Claire is known for roles in Brookside, Clocking Off and Merseybeat. West End roles: Roxie in Chicago and Adelaide in Guys and Dolls. 'A truly great play' (Telegraph). www.menierchocolatefactory.com