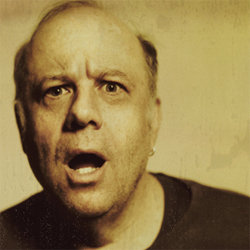 Eddie Pepitone is an Apocalyptic-American (with a conscience) and a master of the dark art of stand-up comedy. Hailed as Don Rickles meets Eckhart Tolle, the Bitter Buddha is a force of nature onstage, switching between social rage and self-doubt. Eddie's been seen on Flight of the Conchords, Chappelle's Show, House M. D., Conan, Community and Old School opposite Will Ferrell. His album A Great Stillness debuted on Billboard's Comedy Top 10 and his comedy is chronicled in the upcoming documentary The Bitter Buddha. 'Directly descended from the Patron Saint Of Alt-Comedy, Bill Hicks' (AV Club).

Apocalyptic-American (with a conscience) and a master of the dark art of comedy, Eddie Pepitone is due to set the Edinburgh Festival Fringe alight with his brand new show Eddie Pepitone's Bloodbath, at the Just the Tonic Caves.

Pepitone's style, an impossibly balanced mix of working-class anger and philosophical meditation, has earned him the nickname 'The Bitter Buddha'. His show is a powder keg of social outrage, railing against the lack of corporate ethics and destruction of the working class; the intellectual degradation of American culture by (among other things) sitcoms, game shows, and commercials; and Yelp.com's enabling of our risk-averse and cowardly society. He also muses fondly on the impending apocalypse, as well as the solace found in feeding squirrels and in a kitten's purr.

Hailed as 'Don Rickles meets Eckhart Tolle', 'The Bitter Buddha' is a force of nature onstage, switching between rampage and self-doubt. His shows are an energetic combo of calm and chaos, blue-collar angst and sardonic enlightenment. It's no wonder that Eddie is considered a favorite among such comedy greats as Sarah Silverman, Patton Oswalt, and Robin Williams.

Eddie has appeared in many television shows across the pond including Flight of the Conchords, The Sarah Silverman Program, Chappelle's Show, House M.D., Conan, Community, Weeds, Monk, ER, and It's Always Sunny in Philadelphia to name just a few. He has also appeared in many feature films. These include the acclaimed comedy Old School opposite Will Ferrell and Vince Vaughn, the John C. Reilly / Sundance 2011 entry Terri, The Living Wake opposite Jesse Eisenberg, and the new indie drama Free Ride opposite Anna Paquin.