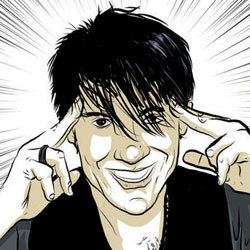 'Imagine if Derren Brown was funny' (Evening Standard). Last year's sell out hit returns! A mind reading show unlike any other! Learn to read minds, detect lies and more. Seen on BBC1 and BBC3. 'The UK's best kept entertainment secret' (Time Out). 'A show that leaves people open mouthed with astonishment and on their feet' (Edinburgh Evening News). **** 'The excitement you get when a show is catching fire' (Herald). ***** (What'sOnStage.com). ***** (FringeGuide.com). **** (Skinny). ***** (PublicReviews.com). **** (FringeReview.co.uk). **** (EdinburghSpotlight.com).

Have you ever wanted to read someone's mind or implant a subliminal suggestion? Doug Segal can teach you that and more in his hit show How To Read Minds And Influence People all while making you laugh in the process.

In 2011 Doug took his 45 minute show to the Free Fringe, buzz started to spread and by the last night of its 10 day run over 100 people queued outside the rammed venue hoping to get their hands on an elusive ticket.

Now, following a critically acclaimed 2011 tour and sell out runs at both Brighton and Edinburgh Fringe, mind reader and comedian Doug Segal (BBC1, BBC 3, MTV & others) returns with his hour long Edinburgh debut.

Doug will teach the audience the techniques he uses to detect lies, implant suggestions, read minds and even "predict the lottery". This unique show promises to turn the audience into mind readers by pulling back the curtains so they can see the workings. EVERYONE who sees this show will leave with an amazing mind trick they can do with their friends.

It's hard science ... abused in the name of tawdry entertainment.