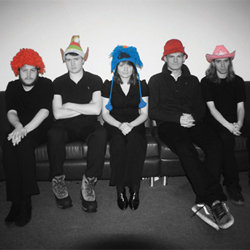 Dodger's Comedy brings you a jam-packed hour of stand-up from the cream of Norwich's up-and-coming comedy crop, featuring acts shortlisted for So You Think You're Funny?, Laughing Horse, Chortle Student Comedian of the Year and Funny Women. On the bill are Sarah Arnold, Al Jones, David Seymour and Nathan Willcock, hosted and compered by Tom Hadden. 'Terrific ... One of the most exciting, unpredictable and rip-roaringly funny nights around' (Platform, Future Radio).

They have been performing comedy for (on average) almost two years, during which time they have been shortlisted for national comedy competitions So You Think You Think You're Funny?, Chortle Student Comedian of the Year, Laughing Horse New Act of the Year and Funny Women between them.

The group regularly organise and promote comedy nights in and around their university town of Norwich, although this will be their first time performing as part of the Edinburgh Fringe.