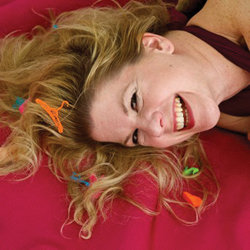 On 6th and 7th tickets are two for one. This venue is not wheelchair-accessible.

In 1978, a mother, widowed, moved the family from Wyoming to a tiny town in North Carolina. Over thirty years later, DeeDee Stewart began writing about her childhood ... and her mother. Putting the 'fun' back in dysfunctional, she spins tales on scarlet fever, scotch over ice and girls gone wild. 'It's just brilliant, so raw and real and ultimately hopeful ... seamless integration of music and photographs, words, and dance' (Whitney Morrill, CoconutGirl.com). 'Brilliantly written and performed ... Stewart is fearless' (Cville Weekly). 'DeeDee Stewart is Dirty Barbie, another way of saying Every Girl' (D. D. Delauney, Thinkingdogreviews.blogspot.com).