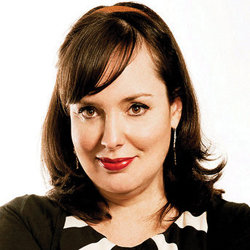 Atheist comedian Deborah Frances-White used to be a Jehovah's Witness. This is the surprisingly hilarious story of what she learnt knocking on your door and how it prepared her for stand-up comedy. 'Gloriously talented! ' (TimeOut). 'Hilarious ... the crowd actually groaned with disappointment when it came to an end ' **** (ThreeWeeks).

Acclaimed comedian and confirmed atheist, Deborah Frances-White used to be a Jehovah's Witness. This is the surprisingly hilarious story of what Deborah learnt by joining a famous cult, knocking on your door and finally finding a way out.

You think doing stand-up comedy is scary? At least the audience has left the house. In this highly anticipated, personal show, Deborah brings together the very best in stand up and storytelling to reveal the strange realities of life as a Jehovah's Witness and explain how it prepared her for a life in comedy.

Deborah Frances-White is the creator of the best-selling comedy show How to Get Almost Anyone to Want to Sleep with You and the creator of the most extraordinary improvisation show in the UK - in which she plays the 'voice of god' and directs well known comedians - The Voices in Your Head.

Deborah appears in MTV's Plain Jane as a guest mentor, starred in the Sony Award nominated improvised Radio 4 Drama A Time To Dance and has a number of screenplays and television projects commissioned and optioned.