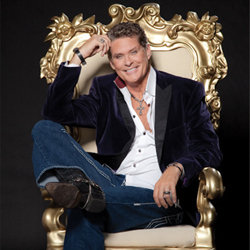 An intimate, hilarious and fun-filled behind-the-scenes look at his amazing life through media, song, dance and audience interaction. Come take a Knight Ride through the 70s, 80s, 90s and today! From the Knight Rider days to Baywatch to Broadway and to the Berlin Wall. Hoff crazy? You bet it is! Come party Hoffstyle! You'll like him, he's nice! Tall but nice!

FROM KNIGHT RIDER TO BAYWATCH, BROADWAY AND THE BERLIN WALL.

Neil O'Brien Entertainment are proud to announce that David Hasselhoff will be bringing his wonderfully unique brand of entertainment to the UK this August with shows in both London and at the world's biggest Arts Festival, The Edinburgh Festival Fringe 2012.

An intimate , hilarious and fun filled behind-the-scenes look at his amazing life through media, song, dance and audience interaction. He will take you through his days on Knight Rider, Baywatch, the Berlin Wall and Broadway with many adventures along the way; don't be surprised if you find yourself onstage. The show is 'Hoff The Charts' with nothing in his personal life left uncensored, to his highly acclaimed iconic role in the Broadway musical, Jekyll & Hyde, to his West End debut as Billy Flynn in the hit musical Chicago and his "over the top" Roger Debris in the Las Vegas production of Mel Brooks' The Producers.
It's an Evening with the Hoff... Hoffcrazy? HoffNuts? You bet it is !

David Hasselhoff is listed in The Guinness Book of World Records as "the most watched TV star in the world" thanks to starring roles in both Knight Rider and Baywatch.

Born in Baltimore, MD, David's first prime-time TV hit was as the star of the now-legendary Knight Rider. 24 years later, the show is still playing throughout the world. In 1989, he headed the cast of Baywatch which ran for 11 years and is still viewed in 140 countries by over a billion viewers every week.

His remarkable music career took off in the late 1980s when he recorded the album, Looking for Freedom. The song became an anthem for East and West Germany topping the charts for eight weeks. He currently has over 40 gold and platinum records worldwide.

In 2000, Hasselhoff made his long-awaited Broadway debut in the hit musical, Jekyll and Hyde before making his West End debut in Chicago, and starring in the Las Vegas production of Mel Brooks' hit musical, The Producers. His autobiography, Making Waves, was published by Hodder & Stoughton in the UK and made the best-seller list.

He was recently honoured by Comedy Central in The Comedy Central Roast of David Hasselhoff and was a huge hit in the UK on Britain's Got Talent, when he stood in for his good friend Simon Cowell in the judge's chair.