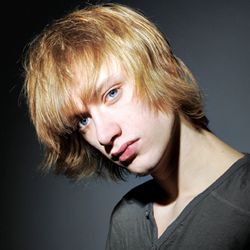 New show from comedy's internationally acclaimed and award-winning half-man-half-Xbox. Star of television's Michael McIntyre's Comedy Roadshow, 8 Out Of 10 Cats, Mock The Week and more, plus his own BBC show, Daniel started gigging aged 16, has toured internationally and sold-out four Edinburgh Fringe seasons. Now 21, he's recently left home and the gloves are off (although the dirty socks are still on the floor...). 'A star in the making ... Unstoppable!' (Telegraph). 'Hysterical ... A stunning show of observational humour (Sunday Express). 'Comedic sensation' (Metro). 'Meteoric' (Scotsman). 'Charming, self-deprecating and genuinely funny' (Time Out). Catch Daniel on tour, www.livenation.co.uk! Sold-out 2008-2011!

After his smash-hit, 50 date live tour of the UK last autumn and having filmed his debut live stand-up DVD this year, comedy's internationally acclaimed and award-winning half-man-half-Xbox, Daniel Sloss is delighted to premiere his brand new full-length show, The Show, at Edinburgh's EICC this August.

Daniel started performing stand-up aged only sixteen and has already appeared on Michael McIntyre's Comedy Roadshow, 8 Out Of 10 Cats, Jason Manford's Comedy Rocks, The Rob Brydon Show, Comic Relief's Mock The Week, The Paul O'Grady Show and 2012's Stand Up For Sport Relief as well as starring in his own BBC show, The Adventures Of Daniel.

...And all before he started to shave.

Now 21, he's left home and the gloves are off (although the dirty socks are still on the floor...)

In August 2008, at just 17, Daniel became one of the youngest-ever finalists in the premiere national comedy competition So You Think You're Funny? The following year his debut solo show, Teenage Kicks, premiered at the Edinburgh Fringe, selling out every night and then transferring to London for his debut in the Capital at the prestigious Soho Theatre whereupon he became the youngest-ever stand-up to perform solo at the theatre and in the West End. That September he also made his national television debut as the first stand up to perform on Ch 4's Paul O'Grady Show.

He recently won Best New Comedian at the Scottish Variety Awards 2011 and has toured internationally in Sweden, South East Asia and Australia in March 2012 making his third successful appearance at the Sydney Comedy Festival. In July 2012 he becomes one of the very few comedians invited to perform a solo season at the prestigious Montreal Just For Laughs comedy festival.

His 2011 Edinburgh Fringe Festival show The Joker was a total smash hit, with Daniel selling out an unprecedented every seat of every show in a 4 week run at the new 400 seat Assembly venue. This show subsequently played to great audiences and acclaim across the UK in a 50 date tour. He is also a popular regular guest on Radio 1's Nick Grimshaw Show.