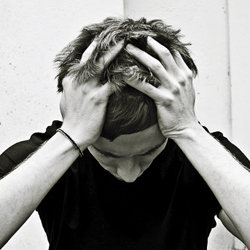 Fresh from Russell Howard's Good News, the Simon Amstell tour and the benefits office in Bethnal Green. 'You knew he was funny before he even opened his mouth' (Scotsman). 'Exquisitely crafted gags and out-and-out surrealism, at its best like a fusion of Emo Philips and Vic & Bob' (Guardian). 'A warm and engaging personality with a rather original and humorous take on life' **** (ArtsInLeicestershire.co.uk).

So You Think You're Funny? winner Daniel Simonsen brings his debut show, Champions, to the Edinburgh Fringe and with it the tales of awkwardness that litters his life.

Daniel made his debut in 2007 having been encouraged to try his hand at comedy by Stewart Lee and Jason Rouse whilst working at a British comedy club in Paris. A year later, he reached the final of the Laughing Horse New Act of the Year competition, but it was his winning of the So You Think You're Funny? competition in 2008 that truly announced his arrival, with a Chortle Best Newcomer nomination following soon after.

He has since performed at the Just For Laughs Festival in Montreal and as part of The Pleasance's Comedy Reserve, before going on to support Simon Amstell on his 2012 Numb tour at venues around the UK. In April 2012 Daniel also appeared on Russell Howard's Good News, with the subsequent YouTube clip racking up 250,000 views within weeks.

Prior to taking up comedy, Daniel moved to Paris from Norway to study at the prestigious Ecole Philippe Gaulier, the renowned school of clowning where the likes of Sacha Baron Cohen, Simon McBurney and Emma Thompson trained.