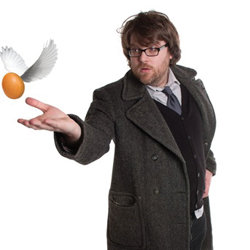 When comedian Dan Mitchell is ill (proper ill, mind), nothing is right. The bed is too lumpy, the duvet is too hot and there's a seagull outside his window playing mind games. He wants nothing more than to lie back watching squirrel movies, getting his brow mopped. But Dan's internet is down and his brow remains unmopped, meaning he only has his imagination to entertain himself. Join Dan as his mind swiftly unravels in a comedy tale of sickness, paranoia, fate and above all, Free Egg. 'Absolutely brilliant' (Ross Noble). 'A joy to watch' (Bob Mortimer).