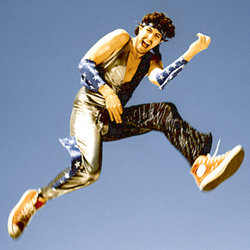 Dan Crane, star of cult documentary Air Guitar Nation and host of the US and World Air Guitar Championships debuts his one-man show featuring original music, stand-up, spandex, booze ... and air guitar, naturally. 'Bill Murray trapped in the body of Sid Vicious' (NY Times). 'So good that people with real guitars now have contests to see who can do the best imitation of his air guitar imitation' (Malcolm Gladwell). 'There is no number of umlauts that do this Jekyll and Hyde of air-rocking justice' (John Hodgman).