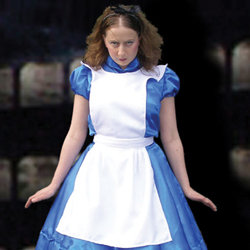 Cabaret performed on the following days in August 2012...

So they missed their cue - no Edelweiss but the show must go on! An absurd, glamorous, multi-genre show from this one-woman powerhouse of sultry vocals and 'ace off-the-wall characters' (Time Out). With solo shows at Leicester Square Theatre and the legendary Royal Vauxhall Tavern, Claire Benjamin has performed her musical comical characters at some of the UK's best venues, she continues to surprise and enchant with every performance. 'The funniest and most unpredictable (show) that the world has ever seen' (Out Magazine).