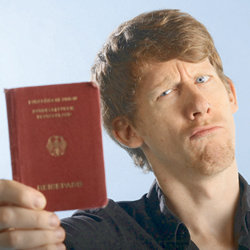 Christian Schulte-Loh is German Comedian. 'One of the most subversive acts ever!' (Spectator). 'A funny German - the only one!' (KKunst.com). Award-winning comedian Christian Schulte-Loh returns to Edinburgh. After touring Europe, the UK, North and South America, Christian returns with the ugly truth: there is no escape from your nationality. 'They hate us everywhere!' He says about his country, 'don't judge a book by its cover - unless it's a German passport'. Any further questions? You will be shocked.