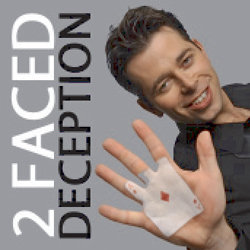 From ITV's Penn & Teller: Fool Us, and his critically-acclaimed West End show of magic and mind control, experience the cheek and charm of Dugdale's devious deceptions. 'More jaw-dropping in the first 20 minutes than two hours and 20 minutes of Derren Brown's Svengali' (Broadwayworld.com). 'A breath of fresh air in a stale magician's cupboard' (Entertainmentnewstoday.co.uk). 'Astonishing mind reading' (Stage). From over 100 appearances at the Monte Carlo in Las Vegas to a private audience with the Queen, Dugdale has stunned audiences all over the world with his award-winning magic.

From ITV's Penn & Teller: Fool Us and his critically acclaimed West End show of magic and mind control, experience the cheek and charm of Dugdale's devious deceptions making his Edinburgh Festival debut at the Assembly Rooms One for the whole month of August. From over 100 appearances in Las Vegas to a private audience with H.M. The Queen, Dugdale has stunned audiences all over the world with his award-winning magic.

He has given command performances at the United Nations, appeared 50 times at the world famous Magic Castle in Hollywood, and amazed a host of celebrities including Angelina Jolie, Sir Roger Moore, Sir Richard Branson and Simon Cowell. He is also the creator and star of the Britain's Got Talent Stage Magic kit sold nationwide.

2 Faced Deception blends magic and mind-reading with live and recorded video to create a unique audience experience. Watching this show you will begin to question whether you are in the past, present or future. Are you yet to be deceived, or has it already happened? Should you laugh, scream, or shake your head in desperation? Live projection and extreme close-up magic will make you wonder whether what you are seeing is pure sleight of hand or camera trickery. Take part in a theatrical and technological journey that will blow your mind. Dugdale welcomes you to a mind-reading circus of magic and mayhem where chaos and coincidence become one. From metal bending within the spectators own hands, to a strange tale of daring and bravado using only a deck of cards, 2 Faced Deception will leave you stunned, amazed and deceived.