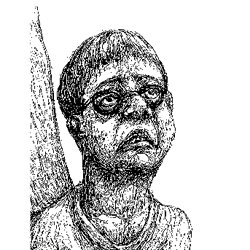 Music / storytelling performed on the following days in August 2012...

Roll up and hear the dark tale of Midge and his mad uncle Clive, an alarming eccentric determined to emigrate to the Moon... When young Midge is suddenly orphaned, all seems to be well in his new home. But when he discovers a terrifying secret, he finds himself in a race against time to save both his first love and the entire human race. A Roald Dahl-ish story told partly in song by one man with a balalaika and one with a guitar, who also play all the parts between them.