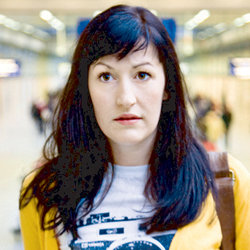 The smallest thing can change a life. In 2010, the award-winning Aussie comic moved to London and learned the word 'bellend'. This and other stories. As seen on the Rob Brydon Show and Russell Howard's Good News. 'One of the more uplifting, delightfully funny hours at the festival' (Scotsman). 'A rare gift for comic storytelling' (Telegraph). **** (Scotsman), **** (Guardian), **** (Time Out), **** (Telegraph), **** (Chortle.co.uk).

She was wrong on both counts...

In 2010, Celia relocated to the UK leaving behind friends, family and her boyfriend, all back in Australia. Has she learnt anything (apart from that popular British word, bellend)? Was she brave, cowardly or stupid for coming over in the first place?

Celia spent a few months last year back in Australia filming her sitcom Laid, for which she was nominated for an AACTA Award for Best Performance, and is currently up for Best Comedy Actress at the Monte Carlo TV Festival in a category alongside Tina Fey.

She won critical acclaim around the world for her first two full-length shows, Flying Solos and Am I Strange, both of which had sell-out seasons in Australia and Edinburgh in 2009 and 2010. She has also appeared on many popular TV and radio shows including The Rob Brydon Show, Chris Addison's Show & Tell, Russell Howard's Good News Extra and US hit Chelsea Lately, and Russell Kane's Whistle Stop Tour for Radio 2, It's Your Round with Angus Deayton for Radio 4.