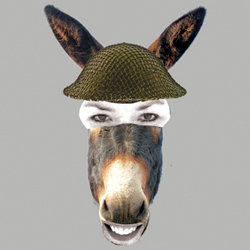 What are Tory feminists? Why isn't there a Spielberg blockbuster about donkeys? Why does the Women's Studies section in Waterstones smell of farts? Bridget Christie knows. And will wear stilts. And will buy one audience member a donkey for a year. Baffling stand-up and grotesque manifestations from "a writer and performer of prodigious talent" Guardian

Bridget Christie is a regular panellist on Radio 4's The News Quiz and the Broadcasting House programme, and is part of the thrilling line-up for Comedy Central's new The Alternative Comedy Experience to be broadcast in Autumn 2012. She has starred in a number of TV and radio comedies including Sarah Millican's Support Group, Miranda Hart's House Party, Cardinal Burns E4 series, and Harry Hill's Little Internet Show, and has recently appeared live as a special guest on Alexei Sayle Presents.

Bridget's previous Edinburgh shows have been comedy picks in The Metro, Independent, The Guardian, The Times, The Stage, The List, Scotsman, The Skinny, and The Sunday Times. Her 2010 show, A Ant, was in the Top 10 best reviewed shows for that year and was featured in BBC2's The Culture Show.