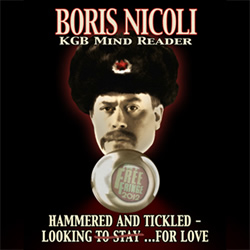 Arriving in the UK with only an entertainment visa and his "fake" mind reading experiments, now visa is expiring. Unexplainable Mind Reading demonstrations with a twist of Original Comedy and KGB leanings, Boris is looking for love. "We are the show together with great minds interacting, like no other. -Boris-

Since the Cold War ended, the last vestige of the KGB Psychic Counter-Intelligence Unit, Boris Nicoli has had to go into the entertainment biz. Arriving in the UK with only an entertainment visa and his fake mind reading experiments... now time is running out, his Visa is expiring.

Time for a new show: Hammered and Tickled- Looking for Love

SPECIAL SKILLS:
1. Mind-reading: Boris is obsessed with the workings of the human mind and has mastered the art of telepathy. Many have been baffled at his ability to learn their innermost secrets.

2. Close-up magic: Boris bamboozles his enemies within inches of their very eyes. No human or machine has been able to decipher his methods.

3. Theatre shows: Having been banned from all casinos, Boris has been forced to exhibit his tricks in front of less-advanced civilian minds.

KNOWN ACCOMPLICES: Boris has been sighted with Matt Damon and Chris Evans. He is also rarely seen without his dancing entourage of Russianettes'.

APPEARANCE: Boris may be seen wearing his medal for the "Pete McCahon Award for Comedy".

LAST KNOWN LOCATION: Boris has been sighted in no less than 17 countries, worldwide, by crowds at sold-out venues

When Joe was 9 years old a relative demonstrated a magic trick. From then on Joe was fascinated by magic and vowed to spend the rest of his earthly time practising similar tricks.

Joe explored the continent of Europe at a young age, landing in London and joining the Magic Circle. This absorbing hobby then set about absorbing his life.

An experience acting as a Russian character inspired Joe to create a comedy ex-KGB personality, thus Boris Nicoli was born.

This web page will self-destruct in ten seconds.