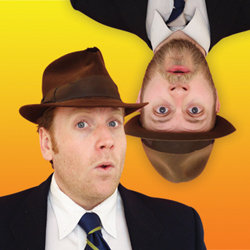 Bob and Jim return with an even hotter and tastier show than last year's hit, Modern Urges. Featuring charmingly cheeky audience interactions, electric uke pop covers, a séance, and the odd bit of mime. Watch out for interruptions from evil nemeses, Barry and Martin, and a special appearance from legendary producers Dan Kapacinski and Tom Selby-Gummeridge, the men behind cockney neo-vaudeville phenomenon, Bob and Jim. 'I laughed like a loon' **** (FringeGuru.com). 'An all-singing, all-dancing variety extravaganza with lashings of triumphant tomfoolery. Truly inspired' **** (Comedy.co.uk).

Bob and Jim return with more inspired silliness following last year's hit, Modern Urges. Along with their trademark charmingly cheeky audience interactions and electric uke pop covers, the show will feature a séance, the odd bit of mime, and an exclusive demonstration of the gadget Steve Jobs was working on when he died. Watch out for interruptions from the duo's evil nemeses, Barry and Martin, and a very special appearance from legendary producers Dan Kapacinski and Tom Selby-Gummeridge, the men behind 'cockney' neo-vaudeville phenomenon, Bob and Jim.

Bob and Jim are a classic double act that harks back to the Saturday night TV family comedy viewing of yesteryear. Their onstage chemistry and inventive, multi-layered and endlessly surprising material has ensured them a cult following amongst comedy aficionados. Bob and Jim appear regularly on the comedy circuit and at festivals and host three popular London residencies. They were Musical Comedy Awards Finalists 2012 and are currently working on various development projects including TV and radio sitcom pilots.