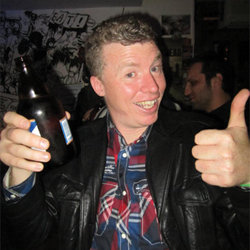 Join Billy on his journey from drugged out loser in search of pussy through marriage to a psychotic Turkish woman and beyond. At 17, Billy started a mind numbing job in a chemical factory. To survive, he experimented with more entertaining chemicals. In this altered state he got married after an all too brief courtship. Before he could extricate himself from this situation, his wife had her first psychotic episode. So, being a nice guy, Billy gave up any idea of divorce and settled into a life of insanity.