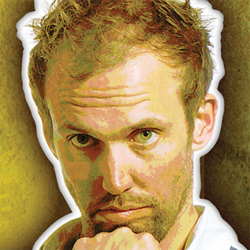 Considered to be one of the best joke writers of his generation Boot delivers the perfect combination of one-liners, observations and non sequitur statements. 'Brilliant gags' (Guardian). 'Charming, disarming and proper f*cking funny' (Tim Minchin).

With his unconventional comedic delivery and the perfect combination of one-liners, observations and gags, Benny is considered in the industry to be one of the most original and finest joke writers in the business. Because of this he is fast becoming known as the next 'comic's comic'. He stormed the Altitude Comedy Festival this March and was the one comedian, out of a line up of top acts such as Tim Minchin, Jimmy Carr and Frankie Boyle that everyone - audience, critics and comics - was talking about.

Last year, Australian born Benny's debut solo Edinburgh show Set Up, Punchline, Pause For Laughter deconstructed the comedians' performance. This year, Benny brings to Edinburgh a brand new hour of fresh new jokes, delivered in his soon-to-be-famous style, and trying to reach a level that athletes call 'in the zone' where, once reached, you would (theoretically) be able to say anything and the audiences will lose their minds.

Benny is still establishing himself on the comedy circuit after going full time this year. He has performed at numerous comedy festivals throughout the world and once became a UK finalist on NBC's Last Comic Standing.