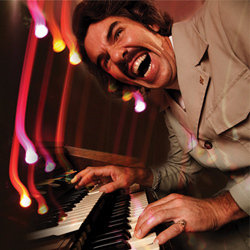 Australia's 'fast-becoming-a-celebrity' organ salesman Barry Morgan is packing up his Toyota Crown and crossing the Pacific! He will delight and entertain you with the Golden Syrup sounds of his 1981 Hammond Aurora Classic. Sit back, relax and be swept away by the mesmerising power of Barry's Zither Arpeggiator, his fascinating fingers and his celebrated one-finger method. Barry knows exactly what Edinburgh has been waiting for - to rediscover the joy of the organ! All polyester safari suit and blow wave hair... joyous clean fun' **** (Herald Sun, Melbourne).

Owner and proprietor of the famous 'World of Organs Super Store' in the beautiful Sunnyside Mall, in South Australia, Australia's own celebrity organ salesman Barry Morgan presents his debut show with the golden syrup sounds of his vintage 1980's Hammond Aurora Classic. Barry knows what Edinburgh has been waiting for - to rediscover the joy of the organ.

Since being plucked from obscurity to perform on Australia's ABC TV's Spicks and Specks, Barry Morgan has been sharing the joy of his organ to delighted national audiences.

When he's not busy giving the public the best organ deals in town, you can catch him performing live at one of his organ demonstrations in Bistro Square at the Underbelly. So audiences can prepare to sit back, relax and be swept away by the mesmerising power of Barry's Zither Arpeggiator, his fascinating dexterity and his celebrated One Finger Method.

With enough cheese to match his infectious smile, the organ's various sounds and features are exploited by Barry to achieve velvet tones, luscious lounge, exotic tangos and grooves "as modern as tomorrow". Barry's hilarious performance creates an utterly charming visual and aural experience that cannot be resisted.