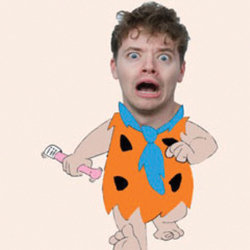 2012 - the Mayans predicted the end of the world, but sketch trio Bad Bread are too young to die. Join them in their bunker (theatre) where they attempt to cheat death, deliver plenty of laughs and answer all of your post-apocalyptic questions. Ever wondered if... the apocalypse would affect Thomas the Tank Engine's timetable? Or if mushroom clouds count as one of your five a day? 'I'm not sure I'd kill for a ticket but I'd certainly maim for one' (ThreeWeeks). 'Wonderfully funny, excellent comedians' (Comedy.co.uk). 'A must-see!' (FreshAir.org.uk).

2012. The year of the Olympics and the Diamond Jubilee - but more importantly the year of the END OF THE WORLD! Apocalypse can take many forms so in preparation Bad Bread have produced a fool proof guide to surviving whatever the Mayans had in mind. So if you - like Bad Bread - are far too young to die, join them in their bunker (black box theatre in the bowels of the Underbelly) where they intend to cheat death - or at the very least go out laughing.