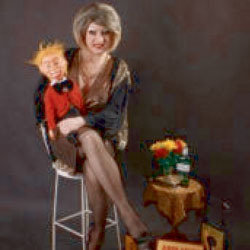 Myra Dubois is to children's entertainment what Margaret Thatcher was to Free Milk. Now you can laugh along with Auntie Myra in an evening of madcap, soul-destroying mayhem featuring comedy magic, sing-along songs and half-arsed puppetry. With a trail of angry parents and weeping kiddies in its wake, Auntie Myra's Fun Show is a hilarious show for children of all ages. But mainly the older ones. Don't actually bring a child, they'll be scarred for life. 'A viciously funny attack on decency' (Skinny). 'One of the most exciting faces in cabaret' (WhatsOnStage.com).